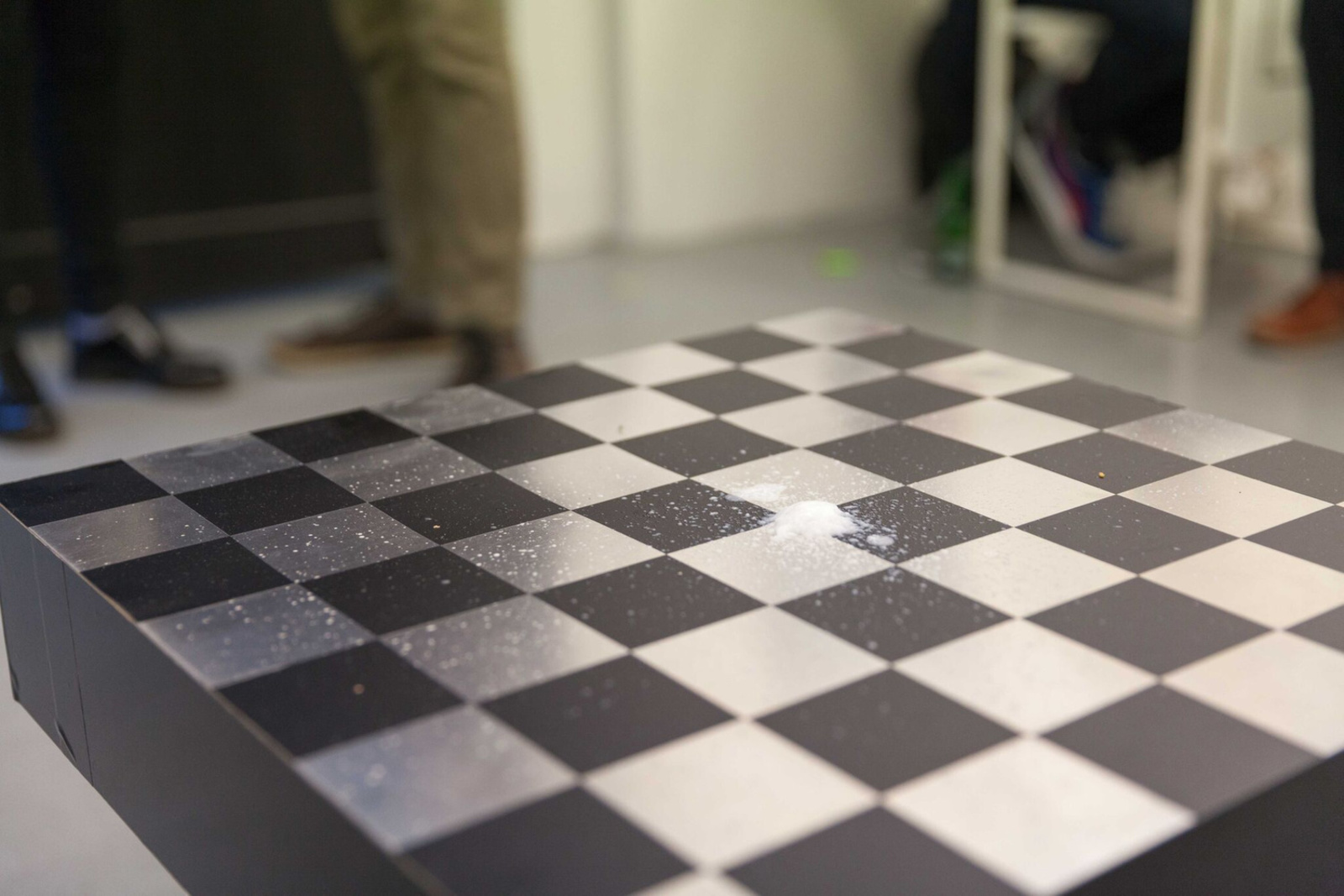 Since 2011 the civil war in Syria has resulted in 465,000 deaths and displacement among almost half of the pre-war population. Northern Bald Ibis birds, an endangered species, who are a symbol of fruitfulness in Anatolia; are not allowed to migrate from Turkey to Ethiopia due to the conflict since 2014, because their migration routes pass by Syria. They have been kept and protected at Bald Ibis Breeding Station at Birecik/ Sanliurfa, Turkey.

Overlapping patterns between those of the Ibis and Syrian War refugees evoke the abstraction of migration. Using cross-disciplinary research creates opportunities for a spatial storytelling experience, opening up conversations about interconnectivity, borders, and migration.

Patterns of Unintentional Coordination is a research project resulted in a series of explorations consists of a light installation, an artist book, found objects and a one channel video. Migration in Simulation is the last piece that was added to the series. It is an animated video simulation of Bald Ibis migration; from a bird’s eye view starting from Şanlıurfa, Turkey passing by Palmyra, Syria that has been attacked by ISIS and lands at Ethiopia where the birds normally migrate to.

Our current geological age is called The Anthropocene; where human activity is most dominant in the nature. Today the Anthropocene is a more than a climate discourse, it constitutes of political and social aspects too. During this talk, artist will present the project Patterns of Unintentional Coordination and talk about abstraction of borders, migration and unrealised networks in society.  This will build a ground for using technology and ecological research as a tool to create social critics and art production.

FAT : This is a collaboration piece of Carlotta Aoun, Beyza Dilem Toptal and Wonjik Yang.

Amazon’s Mechanical Turk is a virtual, distributed factory of hidden human labor for computer tasks that computers still fail to complete. Users accomplish a series of HITs (Human Intelligence Tasks) that computer algorithms of different sort of firms and corporations fail to achieve accurately –such as recognizing pictures, selecting or generating a series of tags, etc– in the environment of a computer interface. They don’t interact with another human and instead become a part of an algorithm, in exchange of a few cents. The MTurk shows to what extent the invisibility of the Internet transforms social systems. The Mechanical Turk is historically a “self-playing” chess board that uses a magnet mechanism in a box that a hidden human controls. In Amazon’s MTurk, the chessboard box is actually the internet, hiding the human labor.

FAT is an installation that visualizes the human in its most abstracted form (fat) within the virtual factory of hidden labor of Amazon’s Mechanical Turk. Using a data set from NYU about the MTurk workers, the average amount of time spent to complete one task was calculated and later converted into calories and grams of fat. The project aims to materialize the remote nature of the work, using coconut oil for its versatility between liquid and solid. FAT abstracts the human component, reducing it to energy and one of its simplest forms. To metaphorize the virtual and GIG economy and invisible structure of the Internet; coconut oil is heated up with a computer CPU which then drips through an ethernet cable onto a chessboard, recalling the original mechanical turk.